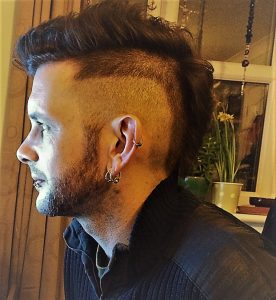 Joel began writing after picking up a copy of A Clockwork Orange from the sixth form library. The next two years of his life were frittered away, not on A-level revision, but on co-writing an epistolary novella entitled Wreakage Follows. Though this project failed to result in publication it did occasion a visit from the Derbyshire constabulary, who told Joel in no uncertain terms that the work was to be terminated. Naturally, the book was completed.

In his late twenties, Joel discovered performance poetry, quite by accident. Having approached the local council for money to launch a literary magazine for new writers, Joel was told that if he hosted a poetry night he would be given the moolah. It was a revelation.

Whereas Joel had struggled to find an audience for his strange fiction, at poetry slams the punters were forced to listen to him – at least if they wanted to stay to the conclusion of the slam. Inspired by this success Joel committed a couple of his performance pieces to film.

An MA in English Literature turned Joel off performance and back to the written word. He writes fiction about losers and outsiders, using generic conventions and stretching them until they snap like spent elastic. Joel is currently working on a novel entitled We Have the Press for Wafer which will be available in November 2017.